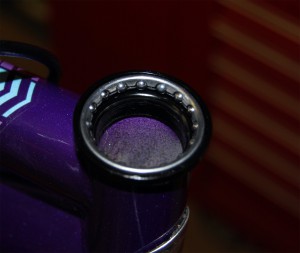 Upper Headset Bearing Before Adding Grease. (Before I shot this photograph, I wiped this bearing and race down preparing it for grease. I forgot I still needed to take photo’s for this blog. However, you never could see grease from the factory.)

I still have access to a new Roadmaster Granite Peak bicycle, which I have written about before on this blog. Roadmaster bicycles are only sold at Walmart, and Roadmaster is owned by Pacific Cycles. Pacific Cycles also owns Mongoose, Schwinn and Iron Horse brand bicycles, which are also sold at Walmart. I picked up the bicycle in a box partially assembled. Most of the bicycle was assembled at the factory; accept for the seat, seat tube, stem, handle bar and front wheel. I thought it would be interesting to dissemble an area of the bicycle assembled at the factory that contained bearings, and see how much grease was applied at the factory in China. I picked the headset to disassemble and inspect.

The Roadmaster Granite Peak uses a threaded headset, and the tools required to disassemble everything is a 6 mm Allen wrench, 30 mm socket or open/closed end wrench, channel lock pliers and a 10 mm open/closed wrench. The disassembly went without a hitch.

Visually there was no sign of grease on the bearings. Not a drop, but they did have the presence of an oily film when rubbed with my fingers. Both the upper and lower bearings and races were in good condition, but there was no sign of grease accept for the oily film. I believe the factory did apply grease, but used a very small amount. I have heard of this condition before with Big Box Store bicycles from Walmart, Sears, Kmart and Target not lubricating bicycles properly at the factory. This concerned me, and should concern anyone who owns one of these bicycles, because if the factory didn’t bother to properly grease the headset, than did the factory bother to grease the crankset or hub bearings? Without grease, bearings will experience premature wear and corrosion. This will cause part failure and an increase in cost when the bicycle owner is forced to pay a bicycle mechanic labor to repair the bicycle. If you’re buying the bicycle for a child who will out grow the bicycle within a year, than it probably won’t be a problem. But if you plan to keep the bike for a while, than checking your bicycle for proper lubrication is a smart idea.

I greased the bearings with Park Tools High Performance Grease and reassembled the bicycle. I am now planning to remove the crankset and wheel bearings and make sure their greased properly. 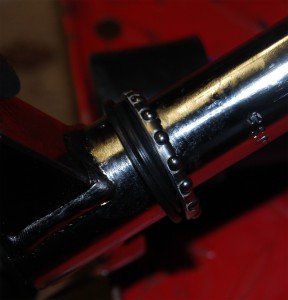 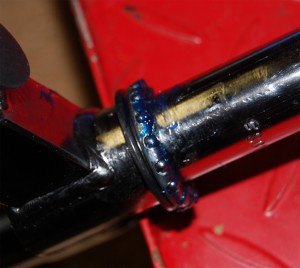 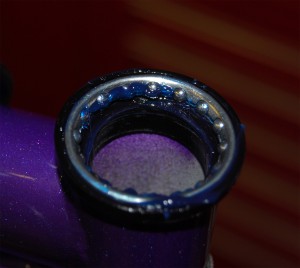