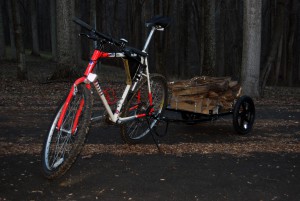 I found a used inStep bicycle trailer called Pronto that was on its way to the trash. This particular model trailer is no longer manufactured and has been replaced by the inStep Take 2 trailer. These trailers are designed to haul kids around using a bicycle, and are available new online and at big box department stores. The trailers are built on a steel frame with a canvas floor, sides and top. Since i don’t have people to haul around, I decided to turn the trailer into a flatbed, and use it for other tasks. The canvas top, sides and floor are secured to the frame using 4 bolts and a few phillip screws. I removed the four bolts, unscewed the screws and removed the canvas top, sides and floor. I was left with a steel rectangular frame. I went down to my local Home Depot and purchased a sheet of stainless steel sheet metal, which just happened to be slightly larger, but very close to the frame dimensions. I than used a Kawasaki 4.5 inch angle grinder with a cutoff wheel to cut the sheet metal down to size to fit on top of the frame. I had some spare rivets, so I drilled some holes around the perimeter of the frame, and riveted the sheet metal to the frame. I than drilled some more holes and added some eye bolts to the frame perimeter to help secure hauled items to the frame, and also to keep them from sliding off. The build was pretty simple and maybe took an hour or two to complete.

The bicycle I use to haul the trailer is a steel frame 26″ REI Novara Ponderosa mountain bike. Its a 21 speed with Shimano trigger shifters. The bike is not a department store bicycle, but I think in terms of quality it fits in the upper lower end when compared to bicycles sold at local bike shops. Its a tough bicycle and perfectly capable of pulling this trailer around fully loaded.

It’s amazing how productive a person can be without gas powered equipment. This is nothing new for people in other countries less dependent on gas/oil, but for the rest of us, it can be a new experience. I now use this bicycle trailer to haul fire wood back to the house, and I plan to use it for grocery runs. It can haul anything that fits on the trailer bed and weighs less than 100 pounds. Don’t get me wrong; I am not advocating throwing out gas powered vehicles, but I am saying there are other ways of doing things that are cheaper and healthier for the user.

If you don’t have a used bicycle trailer to mod, than check out this bicycle cargo trailer on Amazon. I have heard good things about it and its only $79.95: 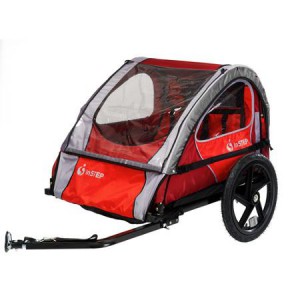 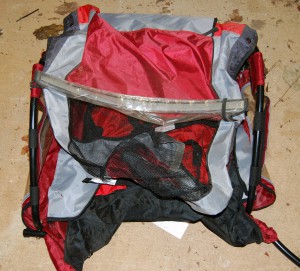 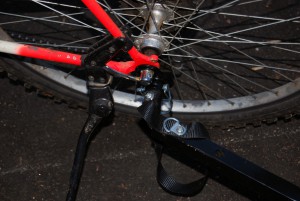 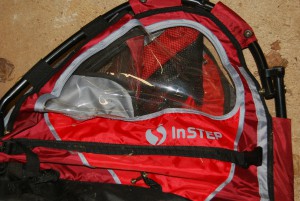 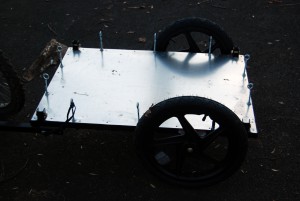 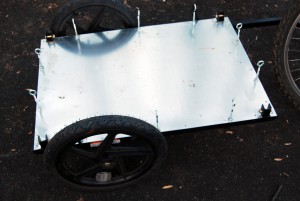 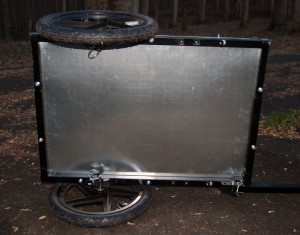 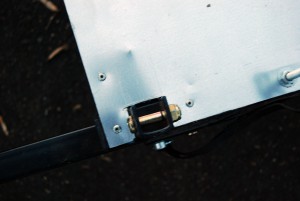